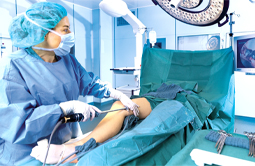 Despite a lot of use of arterial grafts, the greater saphenous vein remains the most commonly used conduit in coronary artery bypass grafting. The invasive techniques have not been used as much for vessel harvesting

Despite a lot of use of arterial grafts, the greater saphenous vein remains the most commonly used conduit in coronary artery bypass grafting. The invasive techniques have not been used as much for vessel harvesting has gained interest in recent years, and many studies have shown that endoscopic vein-graft harvesting decrease postoperative pain, and the length of hospital stay, as well as reducing the need for a large longitudinal incision.

The harvested blood vessel that will be used in coronary artery bypass graft surgery must be germ-free to guarantee proper long-term function and good patient outcomes. In fact, conduit quality is an important factor in long-standing patient results. The quality of the conduit is not always visibly evident when looking at the exterior of the harvested vessel. Damage to the endothelium, the inside of the vessel has been shown to raise the likelihood of graft occlusion or blockage.

During EVH reusable systems are used to harvest about 35 cm of the upper leg GSV through a 3 cm incision on the medial side of the knee. After repeating the same process in the other direction, the entire GSV can be harvested through a single incision. Many systems are available but most frequently used are the disposable systems, namely, Vasoview by Maquet, VirtuoSaph by Terumo, and Clearglide by Sorin. Even though EVH systems have become more accessible over the years, a significant personal, as well as institutional learning curve, persists. After the analysis of 1348 patients that have undergone EVH discovered that the average procedural time of the first 50 cases was 68 minutes, while the procedural time decreased drastically to 23 minutes in the last 200 cases. In general, the patient can expect a personal learning curve of 20–100 procedures that depend upon surgical experience.

After the Endoscopic Vein harvesting for CABG treatment is conducted routine guidelines should be followed for preventing SV harvest site infection. These may include meticulous skin preparation, preoperative antibiotic prophylaxis, use of proper surgical techniques, and wound management. It is essential to identify the risk factors and to act accordingly in a timely fashion to prevent the modifiable causes of GSVHSI.

The most common risk is diabetes and less common is a peripheral vascular disease in the EVH group. EVH group was combined with valve surgery in the twenty-nine percent of the procedures, which was considerably less than in the open vein harvest group. This was because of an increased number of aortic valve replacements in the conventional vein harvesting group.

Book An Appointment for Endoscopic Vein harvesting for CABG treatment